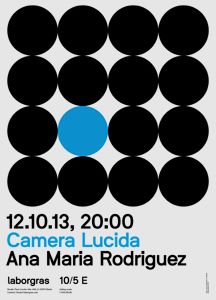 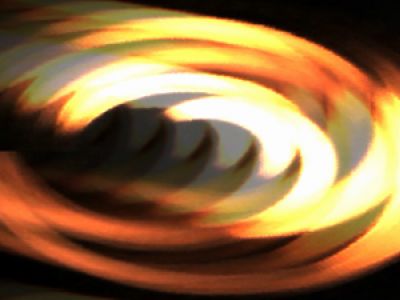 The camera lucida is an optical device widely used by 19th-century artists. It is a four-sided prism mounted on an adjustable stand. Looking through the prism gives the user of the camera lucida the illusion of seeing objects in front of the instrument on the drawing surface beneath. In this project series we look through these optical devices as if by a mirror in the present. We profit by their fuzziness to create distorted acoustic and visual spaces. We use primal light projectors like magic lanterns to bring forward contemporary images that move to live music, video and dance.

Ana Maria Rodriguez studied composition, piano, history and philosophy in Buenos Aires and then went on to Phonos Studio in Barcelona where she studied electronic music as well as algorithmical composition. In 1993 the GMD St. Augustin (Germany) invited her to develop several audio projects for its Artificial Intelligence faculty. Since this time Rodriguez has composed many pieces for a wide range of instruments using live-electronics and computer technology. In addition to this she worked in the field of sound installation and has been invited to the most important festivals for contemporary music like Brückenmusik IV Köln; Donaueschinger Musiktage 2001/2004; Musik im Dialog, Konzerthaus Berlin; Musique Action Vandoeuvre Nancy 2004; space+place Oberbaum City Berlin; Berlin-Buenos Aires 2004, Wiener Festwochen, Wien Modern 2006, Wittener Tage für neue Kammermusik 2006, Forum neuer Musik from the DLF, Chiffren Festival Kiel 2010. The WDR Cologne acquired several of her works in 2002. Between 2002 and 2003 she was on the executive committee of the Berliner Gesellschaft für Neue Musik (the Berlin Society for New Music). Rodriguez has cooperated with improvising musicians such as Annette Krebs, Andrea Neumann, Alessandro Bosetti and Axel Dörner. Furthermore, she has published many articles as well as held seminars on the subject of Music and Technology. She has been awarded grants by the following institutions: Hauptstadtkulturfonds (2002/2004/2006), Landesmusikrat NRW (2000/2001), Ministerium für Städtebau undWohnen, Kultur und Sport des Landes NRW (2003).
Ana Maria Rodriguez has lived in Berlin since 1997.

Cecilia Arditto, studied music at the Conservatorio Julián Aguirre, Centro de Estudios  Avanzados en Música Contemporánea (CEAMC) and Conservatory of Ámsterdam (cum laude); composition lessons in Argentina with Gabriel Valverde and Mariano Etkin; analysis with Margarita Fernandez among others. Prizes and stipendia: First Composition Prize CCRR-CEAMC 1996, “Buenos Aires No Duerme¨ Prize 1998, Mention Concurso Radio Clásica, Concurso de Composición CEAMC-Arditti String Quartet, Antorchas Scholarship for two consecutive years, Fondo Nacional de las Artes Prize, etc. My music was selected for the “3rd Forum International de Jeunes Compositeurs de l’Ensemble l’Aleph, France, the “Boswil International Composition Seminar”, Switzerland and the “Music at the Anthology Festival” in New York for two editions. She was granted a residential grant at the Camargo residence for artists in France to work in my chamber opera “The daughter of the sorceress…” a project together with visual artist Luciana Arditto. Cecilia was guest composer at the Udk, Berlin in two opportunities, and she was granted comissions from the NFPK, Holland, where she lives since 2002. Recent comissions: Borealis festival in Norway and Festival Rümlingen in Switzerland. Her music has been performed in Latin-American, USA and Europe, and many of her pieces have been repeatedly played by different ensembles all over the world. She is the artistic leader of Stichting planB, a multidisciplinary platform of international artists based on Holland occupied on research on music theater.

Annapaola Leso, graduated from M.a,s Academy of Contemporary Dance in Milan, Italy. Before moving to Berlin, she travelled to Brussel and London to increas her studies taking classes with Wim Vandekeybus, Laura Aris Alvarez, Yuval Pick, Michael Clark. She is living, studying and working in Berlin since June 2011. She has studied Performance and Improvisation with David Zambrano, Rebecca Hilton, Julyen Hamilton, Rosalind Crisp and laborgras. She is interested in working on movement which also include gestures, sounds and theatrics.

Lucio Capece, musician born in Argentina based in Berlin since 2004. He plays bass clarinet, soprano saxophone, and Sruti Box. He plays mainly self composed and improvised music, focusing in the time experience and the perception experience as main subjects. He works time in the research of constructing no narrative music (no start – no ending – no developments), and perception working sound in its most granular characteristics and its extremes. In terms of instrumental playing Capece uses his own extensions and preparations. He prepares his saxophone with everyday objects (ping pong balls, water, different kinds of paper, tubes, pieces of metal, plastic bottles, bows etc.) as well as a raw feedback set where the saxophone is amplified and combined with mixers.