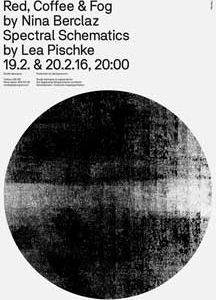 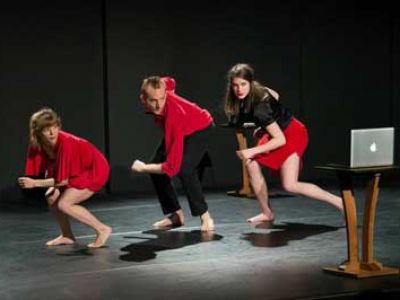 How do we relate to an image and its narrative? What are the remains of the experience of watching a movie? Do movies and TV series have a different impact on individuals? This work is an attempt to create new ways of perceiving a film and revealing the abstracted choreography of its image by conveying a direct physical response. The series “Twin Peaks” directed by David Lynch and Mark Frost in 1990 had a huge impact on the world of television. Also, it had a strong effect on me personally, however the only concrete aspect that remained with me was the colour red and a physical excitement. The remains of memory are fascinating to me because they reveal a character, a perception and an unconscious selection. The videos became an onstage score only truly revealed to the performers by computer screens turned away from the audience. Blurring the subject as well as the terms of behaviour can frustrate the spectator, can make them feel excluded, nonetheless, its power of intrigue is very strong. This is the magic of Twin Peaks and also of Red, coffee & fog.

Choreographer, video concept and Performer:
Nina Berclaz studied at the Conservatoire of Nimes and Montpellier in France. She graduated at Trinity Laban in Contemporary Dance (BA), in London and worked crea- tively with Simon Vicenzi, Rahel Vonmoos amongst others. She choreographed So we made all the food mild and Her Majesty’s Workout. She worked with Vãnia Gala in Invited Guests and 35 days of nothing to say. After doing a placement with Gilles Jobin she became the assistant/operator in Because of love by Franko B. Now based in Berlin, Nina sang with Alan Bishop and Leila Albayaty and is the choreographic collaborator of Annette Sonnewend’s Dance Archive project. She recently created the piece Red, coffee & fog and has been singing in the Choir for the piece Das Ende Der Welt by Saãdane Afif. Currently she works with the choreographer Lea Pischke on her piece Spectral Schematics.

Composer:
Benedikt Schiefer is born in Rosenheim, Germany. He studied composition in Munich and Basel. In addition to numerous grants and invitations, he received a scholarship in 2005 from the Akademie Schloss Solitude, and in 2012 he was awarded the »German Film Critic’s Prize«. His work ranges from classical compositions with or without live electronics to music for films and for sound installations. His works have been performed by, among others, Ensemble Phönix Basel; Ensemble Ascolta; Ensemble Wiener Collage; Ensemble Gelberklang; Neue Vocalsolisten Stuttgart; and at festivals such as Devantgarde-Festival; Wien Modern; Ludwigsburger Festival für Neue Musik; and Festspiele Europäische Wochen Passau.

Performers:
Klaus Bitto studied classical dance at the International Ballet Academy in Fürth and received the Bachelor of Arts in Dance Performance at the ArtEZ Dance Academy for contemporary dance in Arnhem (Netherlands). He could be seen on stage dancing in pieces of, among others, Philip Taylor, Patrick Delcroix, Ed Wubbe, Jérôme Meyer, Erik Kaiel, Arno Schuitemaaker, as well as own works. Klaus was active in the Amsterdam dance scene before he decided the time had come to discover Berlin as his newest adventure. Since then, next to various dance and performance projects in Berlin (Noam Frank, Nina Berclaz, João Cidade), the collaboration with choreographers Johannes Härtl, Lana Coporda and Christian Weiß back to Arnhem, Munich and Braunschweig.

Esther Manon Siddiquie is based between Berlin and London. She is a dancer and choreographer working independently as well as collaboratively. In 2013 she graduated from London Contemporary Dance School, where she was awarded the Charlotte Kirk Patrick Award for Exceptional Potential as a Dance Artist. A first draft of her recent collaboration with James Morgan and Alex Springer ‘The Face To Face’ was presented as part of Touch Wood 2015 at The Place. She was invited to show her work suitcase, ein tanzstück für zuschauer at the Third Kaleidoscopic Arts Platform in the same year. She is also dancing with Sivan Rubinstein and The Mostly Everything People.

Credits:
Thanks to Samuel Kennedy, Marcelo Royo and Zoe Nutchey and Studio laborgras

Spectral Schematics
What is form in the unfolding of a sound? How does it develop over time and how rigid is it? When does a shape appear, when does it vanish? Spectres of the past will come and haunt us in the present. The end of time has not come, yet. We are not in the best of all worlds. Where are we?

Spectral Schematics is both a question as well as an attempt of a response to the legacy of formalism in dance and to the heritage of politics in society. Whilst strictly abiding by the execution of orthogonal angles and elements of clockwork mechanics the dancers cover the space thus creating their own « form ».

Four silent metronomes frame the scene. Vocal fragments of philosophers and politicians accompany the
dancers’ trajectory. Each of them sequentially exposes his view on how to organise a society.

Their respective take on governing structures gradually dissolves into sonic spectrality, « ghostifiying » their own ideas over time. Interventions from the past change the course of the piece, the sound becomes real and tangible in form of ticking metronomes, an end takes place. If for the worse or the better is yet to be found out.

Press:
«In Spectral Schematics, Lea Pischke was exploring the development, formation and evolution of a sound, and the form that it can take. The work with metronomes gave a real intensity to an already captivating sequence where the bodies of the three dancers, traveling in the space, created a shape that formed and reformed itself. Those metronomes gave rhythm to the movements of the dancers, with noises that seemed to disturb the
atmosphere.»