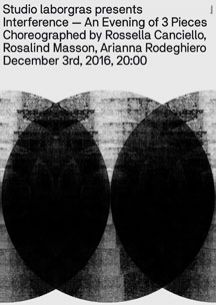 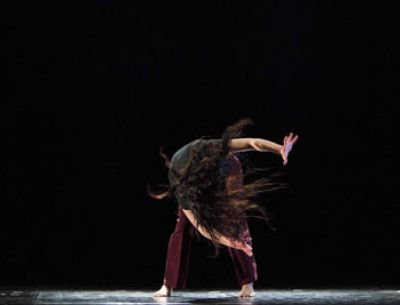 Interference an Evening of 3 Pieces

Between
Choreography: Rosalind Masson , Performed by Mariagiulia Serantoni and Fer Balsera
Between is a duet which attempts to capture the fleeting moments between two individuals on parallel journeys. The choreography was made in response different to destinations along the east coast of America and the sound specially composed by London based sound artist Jan Hendrickse. The material for ‘Between’ was developed over a five year period and first performed as two solos in larger work called ‘Quartet’ supported by laborgras, Creative Scotland and Tramway, Glasgow.

Drone
Concept, choreography & Interpretation: Rossella Canciello , Music & Sound Design : Climnoizer
The piece is a solo one, worked in collaboration with the composer and musician, Climnoizer ( Luca Canciello), who did the original music and sound design. Drone has also been coached by Susanne Linke. Drone is the constant buzz that reminds you what you are not, what you would have wanted to be and what you should have been. It never leaves you alone, it’s constantly present, you try to neglect it but it exists, it’s there, it’s continously with you. To accept it, to change it, to ignore it, to listen to it, to give it up….it’s your choice.  ”you’re doomed at being you.” ( Diary – Chuck Palahniuk )

IN BETWEEN – rhythm of fragments-
Dance and choreography: Arianna Rodeghiero  Music: Samuel Moncharmont
With this solo i explore the unsure territory of the “remembering” of a particular emotion and situation. This attempt begins from a pathways of gestures which gradually enlarges and continues its evolution throughout the whole body defining the space around it.  In this space of the memory the body is constantly moving in between different states, never arriving to a still point. I wanted to create a suspended atmosphere, a “not knowing” dimension where flashes of experienced sensations come back to the body and the mind. It is a private and internal journey through the time, almost a trans, that the spectator attends as if he was invisible to the eyes of the performer, picking at it from the outside.
Rosalind Masson is a Scottish dancer, choreographer and teacher. She trained at London Contemporary Dance School gaining a BA (hons) in Contemporary Dance and continued her studies at Duncan of Jordanstone College of Art and Design, obtaining a MSc in Screendance. After graduating in 2008, she worked with Edinburgh based choreographer Merav Israel, practicing site-specific and improvisational movement. She then joined LaNua dance company for the creation of ‘Enso’, ‘Reflections’ and the development of ‘Avanim’. Rosalind went on to do an internship at Movement Research in New York (2009) which brought her to Studio laborgras (Berlin) where she has been working as a dancer and researcher since 2013. Recent performances include ‘Ambulo Ergo Sum’ at RADIALSYSTEM V, Berlin (choreography laborgras). Long term collaborations include working with Glasgow based music maker Jer Reid and London based sound artist Jan Hendrickse. Her most recent choreographic work includes ‘Between’ with Maria Giulia Serantoni and Fernando Balsera and ‘Quartet’ co-commissioned by Tramway Theatre and Creative Scotland. Rosalind first worked in South Uist with GOAT Media performing in ‘The Time it Takes’. She then went on to work with Ceòlas as Dance Development Officer influencing dramatically her perception of Gaelic language and culture and leading her into her current research.

Rossella Canciello, in 1993 I graduated in Ballet and Modern dance in Italy. Till 2002 I kept increasing my knoledge with teachers such as  D. Zambrano, I. Wolfe, C. Carlson and S. Linke. From 2004 to 2007 I worked in “Macht das Was?” a choreography created by Susanne Linke. I worked in several dance companies, but since 1999 I’ve been involved as a dancer and choreographer in the “BorderLine Danza” contemporary dance company. Since 2006 I’ve been collaborating with Luca Canciello (musician and composer). Currently I’m based in Berlin and working on several projects as dancer and choreographer, beside my commitment as a teacher. Since 2012 I’ve been working at Deutsche Oper and Staatsoper I’m Schiller Theater for several projects and since 2013 I’ve been working with Susanne Linke as assistant and interpreter for her workshops. With my projects coached by Susanne Linke, I performed in several Festivals (100grad Berlin,Tanznacht Berlin, Die Lange Nacht der Opern und Theater, 638 Kilo Tanz Festival). Since April 2015 I’ve been involved in the „Inner Suspension” project, which is the Susanne Linke’s dance technique. The education-project will give me the possibility to get a certification and be authorized to teach the Inner Suspension technique.

Arianna Rodeghiero, dancer, born in Milan graduates in 2009 from the D.A.M.S University for art music and show in Bologna. She attends the professional course for contemporary dance Modem Atelier, by Compagnia Zappalà. She danced in the company Vi-kap and Compagnia Laudati. Currently she lives in Berlin, working with the collective laborgras. She danced in their last two productions: Transition, presented in DOCK 11, and Ambulo ergo sum at Uferstudio, and at RADIALSYSTEM V, Berlin. Her works, Sonata in 3 movements, In Between and Near, were presented in the Theater Hau2 at the 100grad Festival Berlin, in the festival Piccoli idilli, in Milan and in the Find festival, in Cagliari. With the solo In between, she took part in the festival  for young choreographers, Vetrina 2016, in Ravenna. Italy. One year ago she created the collective RooMs, with the musician and sound artist Samuel Moncharmont.