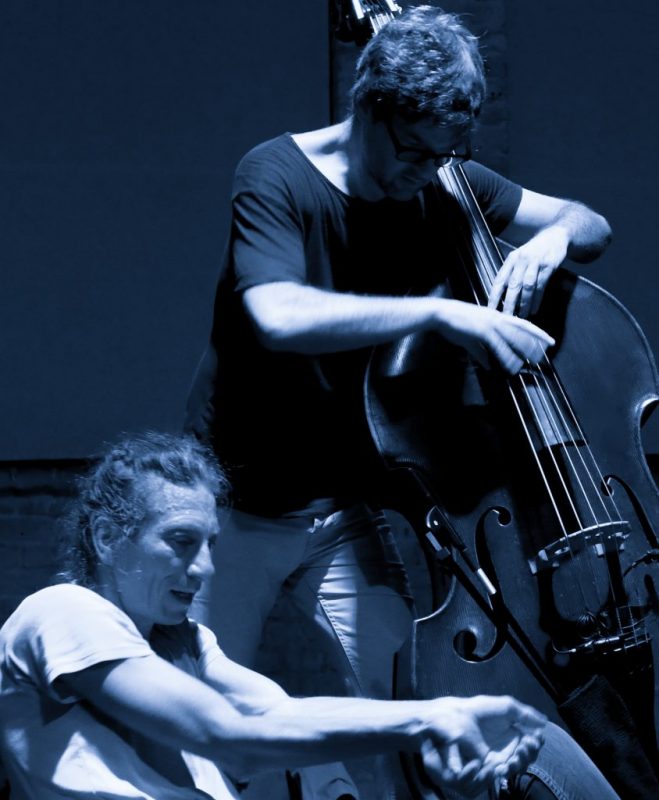 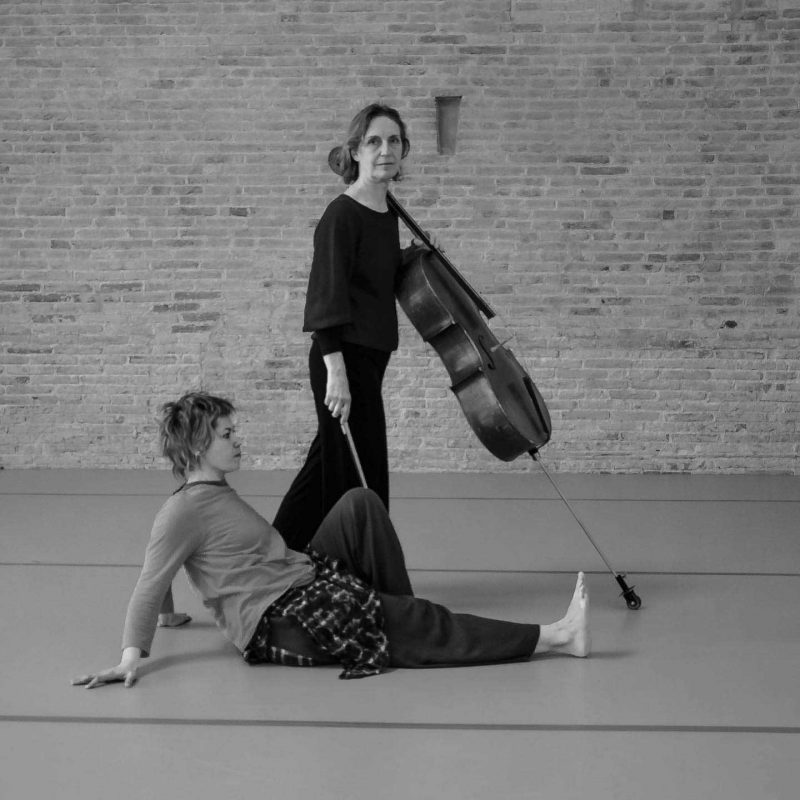 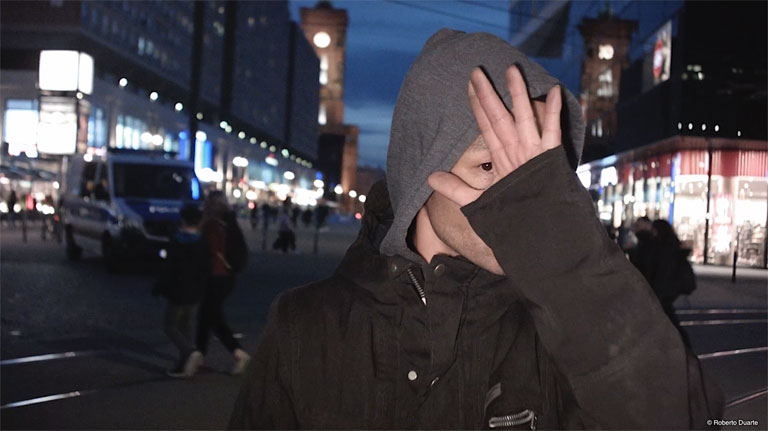 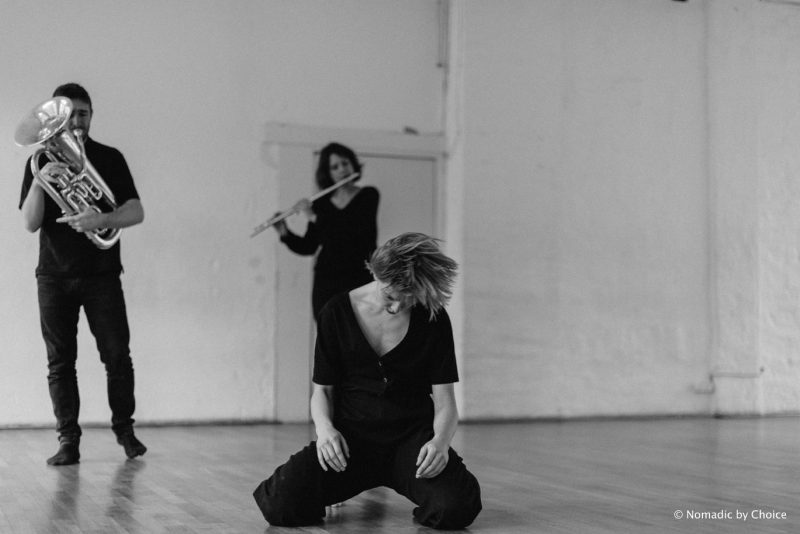 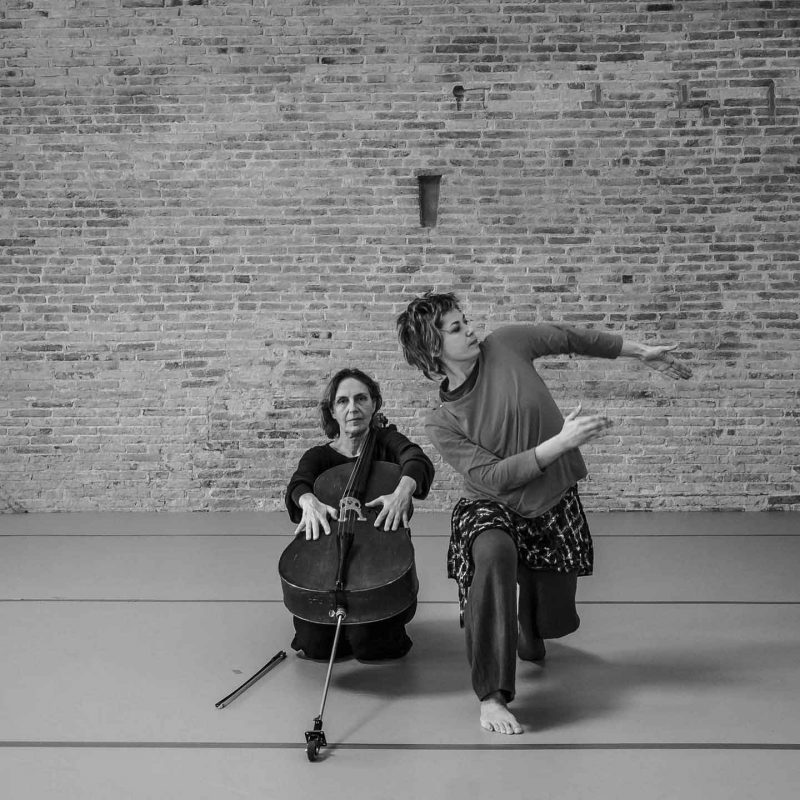 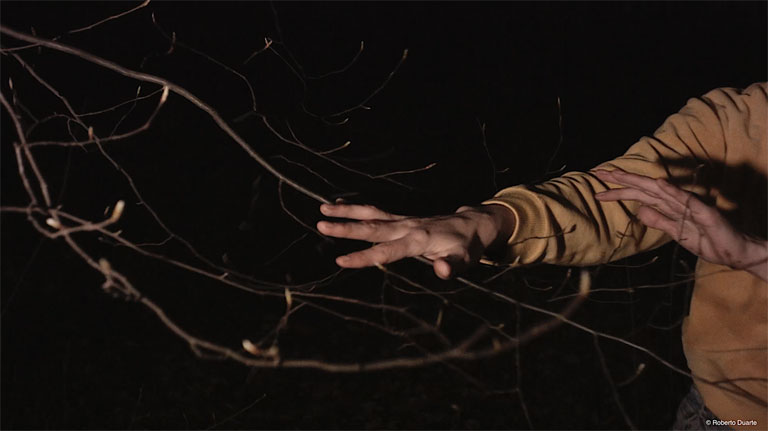 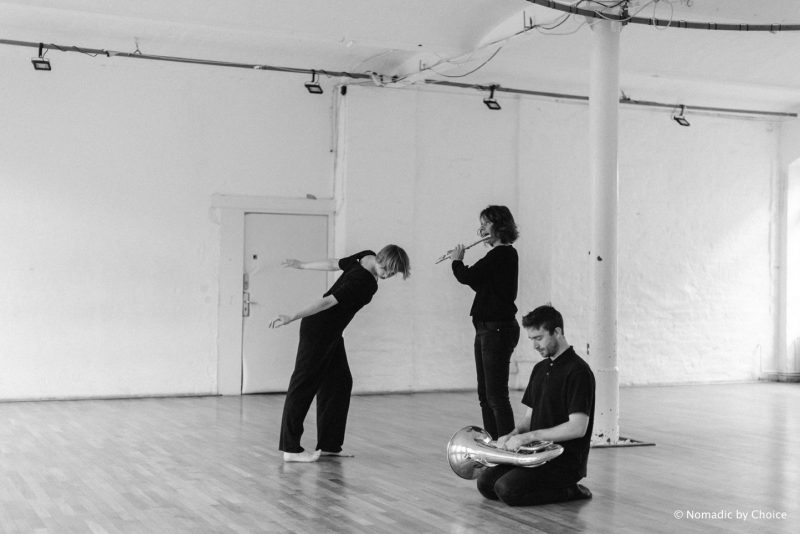 Set 1 – with Elsa Lambey, Joséphine Auffray & Victor Auffray
Joséphine Auffray is a dance artist, performer and choreographer. She studied at Trinity Laban Conservatoire of Music and Dance of London in 2015. In 2017, Joséphine took part of an Erasmus Exchange at Folkwang Universität der Künste in Essen, Germany. Orginally from France, she first studied at the Conservatoire de Nantes with Ballet and Contemporary training.

Elsa Lambey is a flute player and singer.  She participates in several music schools, as well as the ENM in Villeurbanne in France, where she received her prize in classical flute and took lessons in jazz, singing and Cuban music. In 2015, she gets the French statute as an independent ‘Intermittante du Spectacle’ with which she participates in projects like Forget Me Note (a capella polyphony performance), Radio Kaizman (Hip Hop Brass Band), Supachill (Hip Hop Soul), Les Grandes Oreilles (songs). She continues her training, especially for voice and improvisation with Gaël Aubrit (in Lyon, France)

Victor Auffray is a French musician and vocalist with several ensembles ranging from classical chamber music to improvised music. He is a graduate of the Conservatoire National Supérieur de Musique et de Danse de Lyon on the euphonium and a prize winner of the ‘Tuba Tours’ competition, the Luxembourg Young European Soloists competition and the Yamaha Foundation Scholarship Competition. The exploration and use of the voice is present in most of his projects today.

Set 2 – with Denitsa Dikova & Ulrike Brand
Denitsa Dikova is a choreographer and dancer in the field of instant composition and improvisation. Her skills in instant composition, the combination of movement, sound and light create works of depth and character for everyone who is looking for more perspectives, as well as for unfolding their imagination. In order to single out her own individual approach, technique and way of movement shaping her style, she explores different dance styles and techniques: contemporary dance, improvisation, contact improvisation, release, yoga, martial arts. Against this background, she adds her skills and interest in photography, using photographic composition as a basis. Her aim is to reveal detail and multilayers through merging all of the above. After graduating, she started working as a freelance artist. Looking for different approaches to work, together with her colleagues, she set up the non-governmental organisation Garage Collective in Bulgaria which continues to explore the principles of collective authorship. She goes on with her creative work following the sameBarcelona, where, together with Gloria Ros, she explores the techniques of instant composition. Presently, she is interested in both solo projects and collaborations with artists from different spheres of art, dancers, choreographers, musicians, composers, visual artists, costume makers, stage designers, etc. Raised in a family of an actor father and a librarian mother, she has been strongly influenced by different styles of art. Some of the main features shaping her work are silence, concentration, tranquility, dedication to the profession and appreciation of teamwork.

Ulrike Brand, born in Germany, was introduced to contemporary cello-playing by Siegfried Palm.
Since 1985 she has partecipated as a soloist in the major international festivals of contemporary music, worked closely with John Cage as well as commissioned and premiered numerous compositions for solo cello. She has given lectures and masterclasses in Germany and abroad as well as directed and curated events concerning contemporary music. Actually her focus is on multimedial projects between conceptual sound-exploring, improvisation and performance. In this context she is working with performers as well as visual artists and choreographers. In 2015 she received the Research Grant of Berliner Senat and in 2016 the Künstlerhaus Wiepersdorf Scholarship by the Ministry of Cultural Affairs Brandenburg. Ulrike Brand lives in Berlin.

Set 4 – with Ingo Reulecke & Klaus Janek
Ingo Reulecke studied choreography at the college of the art Ernst Busch Berlin after completing his training in contemporary dance. 1998 German Tanzplattform in Munich with “Eklipse”. International Dance Festival NRW with “Sheik Yerbouti”. International Beckett-Festival Berlin with “Gesellschaft 1”, Stardust Festival Stockholm. 2004 a collaboration with Lukas Matthaei for „Winterreisen“ and in autumn 2004 the collaboration with Katarina Eriksson in Stockholm ( Moderna Dansteatern ) for 16 performer. 2006 first price in the theatre festival “vorort” Münster with “diminuendo 2″. 2007 co-production with the director Lukas Matthaei for Forum Freies Theater in Düsseldorf, ” unsere Tage wie Schatten”. 2008 artistic leader for the „Dance Media Academy“ at Kunstfest Weimar. 2009 cooperation with the Iranian director Ayat Najafi for „Lady Teheran“ .2012 ́Urbanscape` site specific installation in cooperation with Lukas Matthaei. 2012 -2014 `Bauhaus Tanzen` (Tanzfond Erbe Project) at Bauhaus Dessau. Since 2016 collaboration with Simon Rose in many different projects like performances and a written text. Since 2005 Reulecke has a professorship in choreography and is leading the dance departement in the college of the arts Ernst Busch Berlin until 2013. 2006 he started the directorship in the co-operative dance education centre Berlin until 2013. Recently many instant compositions with different musicians.

Klaus Janek studied classical double bass with Mauro Muraro and attended workshops with Dave Holland, Peter Kowald, Jaribu Shahid, among others. He works in the field of experimental music and sound research on acoustic and processed double bass. Janek is known for his musical approach that combines the compositional and performative act of his double bass and electronic set and his interdisciplinary collaborations in choreography, music theater and spoken words. In his work, he seeks to balance aesthetics and discourse. His artistic idiom finds concert and festival performances in EU, USA, CAN, J, CH, Russia, China, Malaysia, Brazil and Rwanda, as well as co-creations in movement, theater, sound and radio art and album formats. A particular interest is the influence of tradition and music as a phenomenon of time. Drawing on the qualities that the double bass fulfills as an instrument and function, Klaus Janek’s music supports the coauthors’ and audience’s access to a finely tuned and sensitively complex world of perception.

Light for all sets – Arthur Stäldi, born in Luzern, Switzerland began his dance training in Luzern (Switzerland) and Rotterdam (Holland). Following his education, he worked for several state theatres in Switzerland and Germany and founded the dance group COAX in 1989 with dancer Rica Blunck in Hamburg. In the summer of 1994, he left COAX to become the co-founder of the collective laborgras and has since been involved in numerous international projects with other artists and choreographers. His longest collaboration has been with the choreographer David Hernandez. Since 1996 he is teaching contemporary dance technique regularly in various institutions in Germany and internationally. In summer 2007 he was the coach and training director for the TanzMedienAkademie project at ‘pèlerinages KUNSTFEST WEIMAR’ in Weimar. Since 2005 he mainly works as a instructor, choreographer and dramaturge for laborgras and other artists. He has been improvising for many years as a performer, or with light, for and with numerous artists for different occasions in Germany, Belgium and the Netherlands.